Firstly, I want to thank the membership for just showing up to last week's Labor Day Parade. We gave out over 7,500 hats to our members and their families, reminding all how strong Local 3 continues to be.

We also had a great union meeting last week. Eternal Vigilance. We honored the memory of the victims of 9/11 as we do at every September meeting. I reported on the continuing financial support that the children of those members will receive for the rest of their lives thanks to the generosity of the IBEW members and locals, and all those that contributed to the Local 3 Disaster Fund.

We also noted the deaths of the 19 members who have since passed due to 9/11-related illnesses from exposure at the WTC site. They worked in the aftermath on the pile and the in the surrounding neighborhoods making sure that critical infrastructure was repaired in order for the N.Y. Stock Exchange to get up and running. Those members paid the ultimate price and we owe them all a debt of gratitude. We have many members who are sick today, over 2000 that were exposed to the toxins with claims that we will have to deal with for years to come. I want to acknowledge the effort of our Workers Comp Representative Cliff Tuohy who has made sure that the victims and survivors have gotten all of the compensation they were entitled to at no cost to them. His compassion and expertise guiding those members and their survivors through the Victims Compensation Fund has been invaluable. Our hearts go out to all of them.

It is important to remember that America came together on September 11, 2001 in the aftermath of that tragic event. We were all Americans - not Democrats or Republicans, union members or immigrants. We were united as one country.

Unfortunately today the divide in America is extremely apparent and ugly, driven by a President who revels in pitting Americans against one another. We need to fix this now for the sake of the more than 3,000 Americans who lost their lives on that day 18 years ago. We also honor the brave first responders who selflessly ran into those towers in order to save lives and died, as well as those building tradesmen, cops and firemen that labored on that pile in the rescue and recovery effort that are now sick and dying. We also honor America’s brave armed forces who took the battle to the enemies who perpetrated the attack on American soil and gave their lives and limbs in that fight. We owe all of them a debt of gratitude. Every American should be standing shoulder to shoulder today as we did on 9/11/01 emulating and protecting the values that have always made the United States the greatest country in the world. 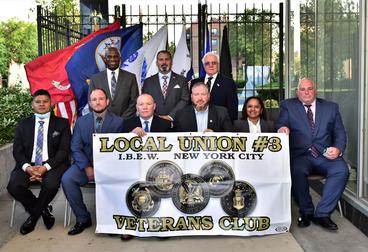